The original studio workshop was established in Peterborough, England in 1983 and re-located to the Isle of Wight in 1997.

Inspiration came from the myriad patterns found in nature, such as striated and weathered rock formations, and the beautiful colours and patterns of tropical marine fish.

To produce each piece of glass involved a lengthy, time consuming, process, which took many years to develop and perfect. From the initial inspiration the complex process involved cutting, assembling, fusing, grinding and/or slumping, and polishing.

Brian started out with an interest in ceramics but was always interested in what was going on inside the piece. He eventually realised that if he wanted to see the interior then glass was the best material to work with.

Jenny's interest started with the surface pattern of textiles, packaging, wallpaper, etc., then she moved over to glass due to its architectural applications.

Subsequently, they made much larger boulder like pieces and started to incorporate dichroic glass (dichroic glass has a thin layer of metals and other materials to give a very high colouration which changes due to light and viewing angle) in some pieces, and using optically clear glass.

A five year project was the custom making of 30” blade diamond feed saw, much of which he designed and made, most of the working wet parts were in stainless steel. This was specifically made to be very flexible, to cut odd shaped large pieces of glass; the blade is designed that once the cut is finished it can be slid on its own trolley into the cut enabling larger pieces of glass to be used.

Thanks to all around the world, who helped out on this. 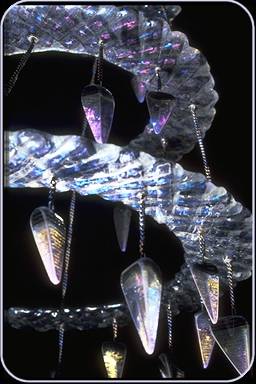 The work of Brian and Jenny Blanthorn in more detail

Each piece of work was envisaged as a 'finished article' and the processes required to produce it were carefully mapped out by working back from the vision of the finished article. Often previous firings were repeated and changed to suit a new idea. The temperature in the kiln could be varied to produce very different or more subtle changes in effect, and these were carefully recorded and catalogued for future reference - these detailed notes extended as far back as 1976 and provided an invaluable database for work.

The pieces started out as flat sheet glass. This was painted or block printed using specially made rubber blocks; sponging and dragging techniques were also utilised. These techniques helped to create the beautifully subtle colours and internal patterns of the finished product.

The bowls were produced using sheet glass, which was cut into narrow strips and assembled, cold and flat in the kiln, to the desired shape - this could be a very complex multiple laminate with glass layered horizontally and vertically. For the coloured bowls high quality coloured glass was used.

The glass 'pebbles' were created in a process similar to that of the bowls, except the glass strips were much wider and made in a large long block.

Once assembled the glass was heated in the kiln to a temperature between 800 and 950 degrees centigrade until the glass had 'moved' with the heat the required amount. In simple terms the hotter it got the more the glass 'moved', and a simple mould was sometimes used to control the amount of movement - close control was determined by the temperature. This was then followed by a period of cooling.

The bowls were then usually ground on one or two sides and the edge ground and polished. Following this they were slumped into a mould in the kiln, and the temperature finely tuned to give a 'fire' polish (the glass surface was slightly melted) before being slowly cooled. The bowl may have then be polished on the rim or the back depending on the desired finish.

The pebbles were also fired and cooled, and then sawn with a diamond saw, and rough chopped to shape with a special pitching chisel. This was followed by rough grinding, then fine grinding and then, the embedded in wax ready for polishing on one or more sides. Finally they were inspected and signed.

From initial inspiration through the complex process of creation to the finished article could take as long as two to three months. The investigation process was ongoing over decades.

Blanthorn glass was exhibited world-wide and can be found in public and private collections in the UK and overseas.